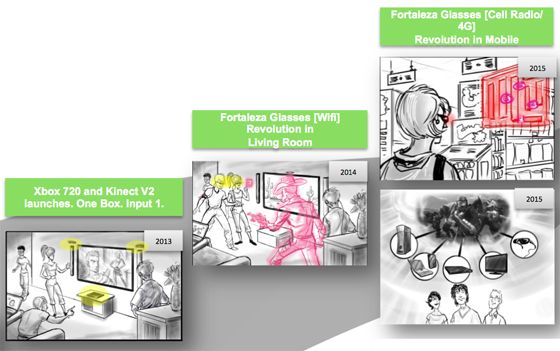 Microsoft lays out a roadmap for its “Fortaleza” Kinect Glasses — which appears to be a research project the company is working on. There’s little mention of the hardware involved, but the glasses appear to be Wi-Fi- or 4G-enabled and incorporate augmented reality in a way that’s similar to Google’s Project Glass augmented reality glasses. Described as a “breakthrough heads up and hands-free device,” Kinect Glasses is marked as a 2014 product that won’t launch alongside the Xbox 720 console. Microsoft doesn’t provide any specifics about how the glasses will work on the Xbox, but they do appear to be designed to be mobile for use away from the console.