How to hug a chicken, taste bitterness via the Internet | SmartPlanet 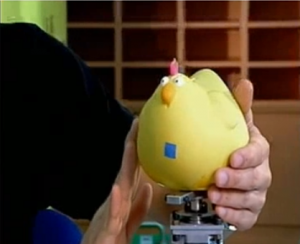 Electrical engineer Adrian Cheok is the first person to hug a chicken via the Internet. And now he’s building gear to transmit touch and taste – helping us hug kids and taste flavors from afar. IEEE Spectrum reports.

While at National University of Singapore, his 2005 Poultry Internet project  showcased his fascination of transmitting not just multimedia but also sensations over the Internet. Starting with haptics, the technology of touch, he built a system that would let pet owners send their animals a pat from their office.

First, he built haptic jackets for the chickens, embedding them with vibrating elements.

The chicken’s jacket was connected wirelessly to the Internet, and its coop was rigged with a webcam. Then, in his office, Cheok patted a chicken doll that had touch-sensitive sensors, and the squeeze was transmitted to the live bird while he watched. The chicken had been hugged.

A 2007 project – the Huggy Pajama – allowed faraway parents to give their kid a remote good-night hug by just by pressing buttons.

Right now, he’s working on a commercial product that would let a user send a squeeze (and a warm a sentiment) to the ring on someone else’s finger. A prototype could be ready by the start of 2013.

He’s also working on a digital lollipop that can electrically and thermally stimulate the tongue to produce basic flavors like bitter, sour, salty, or sweet .

Cheok thinks multisensory communication gadgets will usher in the next stage of the Internet. “I believe we need to move from the age of information, which we have reached today, into the age of experience,” he says. 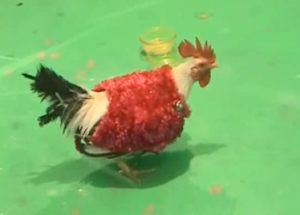 “The ultimate Internet,” he adds, “will integrate all our senses.”

Now at Now at Keio University’s Graduate School of Media Design, Cheok’s nurturing the next generation of creative innovators.

Janet Fang is a contributing editor for SmartPlanet.