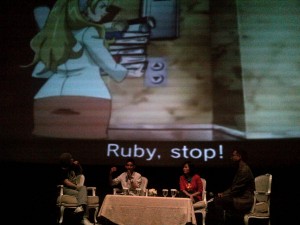 I had the great pleasure to meet Kobun Shizuno, one of Japan’s anime leaders, in Jakarta at the Creative Week Indonesia. I was deeply impressed with his focus, I saw him working at every spare moment at the conference with paper and pencil on his animation. We had many interesting discussions about his work over dinner. He was nice enough to write me a letter, including cute version of Conan!

Born in 1972 in Tokyo, Japan, Kobun Shizuno studied at the Yoyogi Animation School and made his debut in the anime world as the Assistant Director of Giant Robo: The Animation. He has since served as Director or Co-Director of many of America’s biggest anime series including Burst Angel and Elfen Lied as well as fan favorites such as Case Closed, Ai Yori Aoshi, Peacemaker, Princess Nine, and Final Fantasy: Unlimited. Fans of Saturday morning cartoons will recognize Mr. Shizuno as the Director of GI Joe: Sigma 6. His largest projects include Fist of the North Star motion picture and serving as Co-Director for the Neon Genesis Evangelion feature films. He is famous for directing the Detective Conan series and movies.