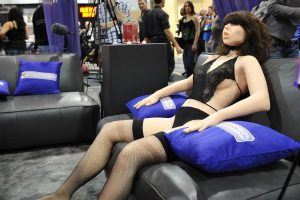 The sex robot industry is thriving, with some academics predicting that humans will be having more sex with robots that with each other by 2050.

But while many people find the idea of sex with a mechanical object abhorrent, academics are keen to find out who is most willing to embrace (literally) this new technology.

Speaking at the Love and Sex with Robots conference at Goldsmiths, University of London, Jessica M. Szczuka from the University of Duisburg-Essen in Germany took on the preconceptions of lonely men shacking up with cyber-lovers.

“I wanted to see what kind of characteristics influence the use of sex robots,” she told an audience at the conference.

“We react towards computers and machines as we do with human beings. This involves showing empathy and keeping an interpersonal distance with robots.”

Szczuka, along with Professor Nicole Krämer, conducted an online survey of 263 hetrosexual men between the ages of 18 and 67.The men were shown a two-minute video of different female robots. They were then subjected to questions that revealed their “personality measures” and “attractiveness ratings”.When they were asked whether or not they would buy such a robot within the next five years, 40.3% of the respondents said they would.

Szczuka does admit there were limitations to the study. Price of the robot wasn’t mentioned and she allows that people willing to take the online survey may already hold a more positive view of robots than others.

“A great next step is to investigate the interests of women when it comes to sex robots,” Szczuka said.

Dr Kate Devlin, a senior lecturer in the Department of Computing at Goldsmiths, University of London had already said in a previous talk that there are plenty of benefits for both sexes.

“There are a lot of heath benefits. You can be attached to something that’s not human and we’re already providing a lot of health and therapeutic technology to help older people in care homes. Why can we not provide sex tech as well?” she told the assembled audience.

“But women are massively underrepresented in the technology world and we see that reflected in the products.”