A new device called the Kissenger makes it possible to give and receive a kiss through a smartphone — but it’s a bit early to start puckering up. 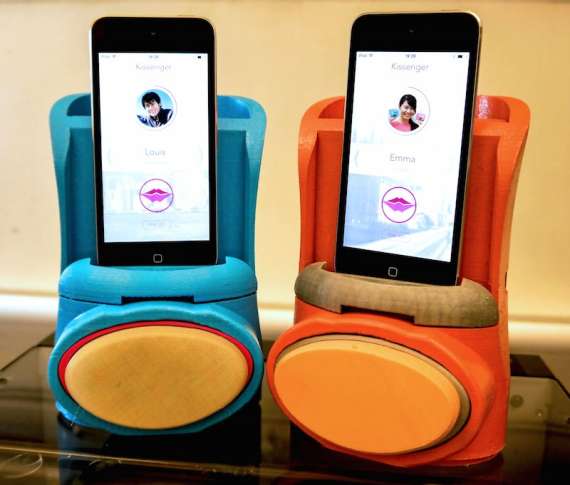 WASHINGTON — Long-distance relationships can be challenging, but a new device makes it possible to kiss someone over a smartphone.

Kissenger — no relationship to former Secretary of State Henry Kissinger — is in the working prototype stage, said Emma Yann Zhang, a doctoral student at the Imagineering Institute in Malaysia.

“It’s a device where you can plug into your phone, and it has an array of force sensors and actuators inside the device that can measure your lip pressure,” Zhang said.

The prototype, made from a 3D printer, includes a holster which holds the phone and an oblong silicone pad.

When exchanging a long-distance kiss, each participant can see the other through Skype video and feel the lip pressure being transmitted by the partner in real-time.

“We wanted material that is as close or similar to human skin, which is soft and flexible,” said Zhang.

Zhang developed the prototype and accompanying iPhone app for her doctoral research in conjunction with professor Adrian David Cheok, at City University London.

“We want to make online or digital communication much more intimate,” said Zhang. “We can see or hear each other, but we can’t really touch each other through the internet.”

Zhang said the physical touch is very important for human relationships, especially between lovers, and for parents and children.

“Some parents want to kiss their children or grandchildren when they’re not living together with them,” she said.

While interest in the concept has been high, Zhang said there are no current plans to commercialize Kissenger, although she would be open to working with companies willing to collaborate.

The quality of the kiss likely leaves something to be desired — it’s more of a peck on the lips,  since there’s no tongue component.

And while Kissenger already has a sizable “ewww” factor — wait, there’s more.

“Now we’re looking at making the resolution of this device higher, with more sensors and actuators to  provide a more realistic kissing sensation,” including your partner’s scent, said Zhang.

“The next version we’re looking at building a kissing robot,” said Zhang. “It’s going to be a humanoid robot head, but with interactive lips.”