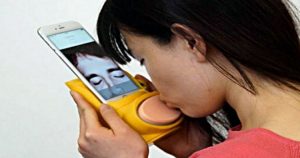 If you can’t be with your loved ones this holiday season, perhaps you’ve told them that you’re sending a kiss. But if you could really do just that—send a kiss by smashing your lips against a rubber pad that’s attached to your smartphone—would you want to?

The Kissenger (so named because it’s a “mobile kiss messanger”) could give you that awkward option. The two-way device, which allows users to simultaneously send and receive the sensation of a kiss, comes from researchers in London who work on haptics, the science of touch. Emma Yann Zhang says her kissing machine is intended to overcome problems inherent in long-distance relationships. The Kissenger, she wrote in a recent paper, provides “effective communication of deep emotions and intimacy through a multisensory internet communication experience.”

For that intimate internet-enabled smooch, the two users insert their iPhones into their plastic Kissenger devices and place a video call via FaceTime or Skype. When the time feels right for a kiss, both users press their lips against silicone pads containing force sensors. The data representing the pressure pattern of each user’s lips is transmitted in real time to the other user’s unit, where actuators beneath the rubbery surface push upward to roughly reproduce that pattern. 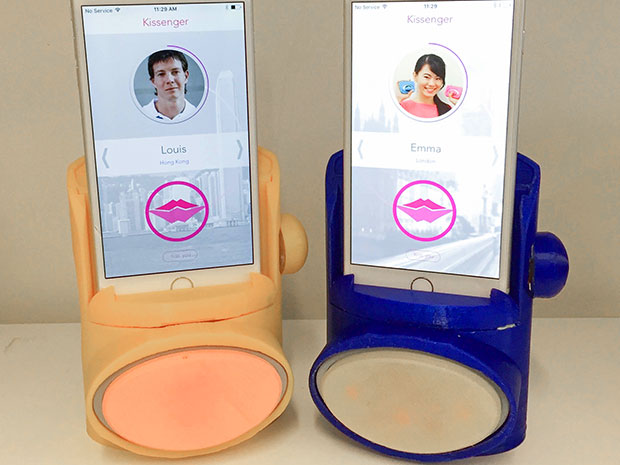 Zhang imagines the Kissenger being used not only by long-distance lovers, but also by family members. If grandma held her unit to her cheek, for example, a grandkid could plant a kiss there.

Kissenger could also find less… traditional applications. The gadget got a burst of publicity this week when Zhang presented her device at a conference about love and sex with robots. She thinks it’s inevitable that humans will form intimate relationships with artificial intelligences and robots, and she’s wondering how those relationships would be changed if the two entities could share a kiss. However, she noted in a recent report on her project, “this research will not attempt to conclude whether it is ethically acceptable to have intimate relationships with robots.”

Her upcoming experiments with the Kissenger will provide some interesting data, however. Now that she has a working prototype, Zhang is planning lab tests to assess both its practical and “hedonistic” aspects. In one test, pairs of humans with existing relationships will try out the device and rate its usability and how much pleasure they derived from the experience. The researchers will also record physiological data like blood pressure and heart rate to see if remote kisses affect bodily systems in the same way that real kisses do.

And then there’s the Turing test for kissing. In this experiment, each subject will use the Kissenger to send and receive kisses from two anonymous individuals, and will again be asked to rate their feelings of pleasure and empathy for their partners. But the test subjects won’t know that one of those partners was just a computer program simulating the pressure patterns of a human kiss. Will they be able to tell the difference?

The Kissenger is Zhang’s PhD project—she’s currently working in the City University London lab of Adrian Cheok, a trailblazer in weird sensory technologies. Five years ago, IEEE Spectrum described the little haptic jacket he invented that enabled him to hug chickens.