Article in the Guardian Newspaper 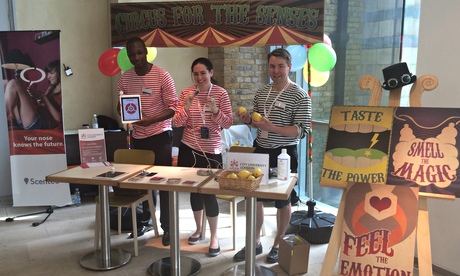 Adrian David Cheok, professor of pervasive computing at City University, London, featuring the phone that wakes you up to the smell of bacon

Tell me about your research
“We are trying to bring all the five senses to the internet, so we can transmit and communicate in a multisensory way.”

OK, so how does it work?
“We have a device called Scentee which you attach to your mobile phone. What it does is emit a puff of scent, such as bacon, coffee or lavender, (using chemical cartridges) when you send someone a text message. We have similar devices to produce taste using only electrical current. So if you’re cooking, you can send the taste and smell of your cooking to all of your Facebook friends. We are also looking at touch technology, making devices like RingU, where you connect your ring to the internet via your mobile phone. You can be thinking of your friend, who might be anywhere in the world, and squeeze your ring and they will then get a squeeze on their finger.”

Why should the public be interested in your research?
“Currently the internet is very much about audio and visual communication. But the sense of touch, taste and smell are very important in our physical communication – these senses are connected to the limbic system of the brain which is responsible for emotion and memory. So when you’re chatting online or Skyping, you actually lose a lot of the human emotion. We want to bring these senses to the internet so in the future you will be able to have a sense of presence.”

What are the challenges you face?
“There’s a saying that in the 21st century the most valuable research is time, because now with the internet we basically have infinite information. Yes, time and funding are very important, but you need to have some creativity. You need to have students who are willing to not do incremental work, but what I call quantum step work. In the atom the electrons will fly around in the one band, but that is incremental work. What you need to do is jump to the next quantum gap. We need to have young people who will become scientists and engineers, but it’s really great during education if they are exposed to the creative arts and other fields so they can understand creativity and design.

“We have to remove the barrier between academia and the public, and if you don’t, it is the universities that are going to suffer, because knowledge is going to become more and more free – and you are seeing this now with things like Ted talks. Universities and researchers have to keep up with the internet age and that’s very important to survive in the 21st century.”

What excites you about research?
“I want to invent completely new technology and push the barrier of knowledge. People might think it is really wacky or crazy at the time, but then when you can show them that it really works, you can get a lot of very positive feedback. The most important thing to do is to be totally original.”