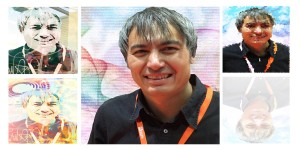 You wake to a loving hug from your partner a 1000 miles away provided by haptic sensors in your pyjamas. The scent of your breakfast wafts towards you from your smartphone and, before you leave for your morning appointment, you share a goodbye kiss with your absent lover, using a pressure sensitive, bi-directional kissing device. Welcome, to the weird and wonderful future of the multi-sensory internet, and the visionary, pioneering work of Professor Adrian David Cheok.

Cheok is currently Professor of Pervasive Computing at City University London and the Founder and Director of the Mixed Reality Lab, Singapore. A gifted inventor, academic, and speaker, with an impressive research pedigree; his work ranges across wearable computers, ubiquitous computing and pervasive and virtual computer realities.

In person, he is affable and animated, throwing out ideas with a rapidity that makes you wonder why he never runs out of them. After spending a few minutes with him, it’s easy to see why, because many of his ideas are a quantum step ahead of everyone else’s.

“We live in the information age and can share almost limitless data,” he says, “but it’s still very difficult to share experiences, because an experience, is about all of the five senses.”

The Next Level of Internet

Cheok wants to create the next stage of the internet, a multi-sensory platform enabling entirely new types of communication. From touching at a distance to smelling and tasting in virtual environments; Cheok’s vision of the future will see us connecting and augmenting the physical and virtual in ways that will change our perceptions of both.

Developing effective interfaces to enable human sensory communication over networks, is no small challenge. Cheok collaborates with researchers and engineers across the globe, working to push the envelope of the possible and to develop new tools and interfaces.

“It’s still a very big research issue,” he says. “How do we sense and how do we replicate the sense of touch, taste and smell? The fundamental difficulty is that audio-visual signals, such as light and sound are waves with different frequencies and [while] you can easily turn a frequency into a number and send it over the internet, smell and taste are molecular-based.”

Since molecules cannot be transmitted through the web, Cheok’s approach is to build devices that can create sense perceptions and send the output of the devices as messages over the internet.

Nimesha Ranasinghe, a former student of Cheok’s, recently demonstrated a ‘digital lollipop’ device which uses electrical and thermal stimulation to create artificial taste sensations. Combining temperature variance with electrical currents has (so far) yielded impressive results. Still, the complexity of the human taste response requires that it be paired with our other senses to create a full flavored response.

Cheok is involved in a product called ‘Scentee,’ a mobile messaging system that uses chemical aromas paired to a smartphone app to send smell messages over networks. The scents are released by an accessory plugged into the phone’s dock connector. While this approach has merits, Cheok acknowledges its limitations. He is currently researching the use of magnetic fields and talks of wanting to stimulate the senses directly.

“If you have a real taste, for example, a drop of lemon juice on your tongue, there is some kind of chemical ionisation. But the next level, is that it causes some sort of electrical signal. What we are doing, is directly stimulating with the electrical current, that signal. You can use similar techniques for the touch receptors [and] you can simulate touch using electrical signals. With the olfactory or smell sensor, the principle is the same”.

Ultimately Cheok’s vision is not tied to a single device or fixed approach; it involves using cutting-edge neuroscience and engineering disciplines, to push past the limits of what is currently possible. He is confident that the ever-rising bell curve of technological advancement will see his ideas come to fruition in the next five to ten years.

It is hard to over-estimate how potentially revolutionary a sensory internet will be. Cheok believes that initially, people will attempt to reproduce what is familiar to them, but over time, new kinds of creative expression will develop.

What Will You Program for Dinner?

For Cheok, the future is a place where we will program food, in the same way, we now program our music. Instead of hugging one person, we will embrace thousands. These will be new kinds of sensing and communication experiences that will alter the way we feel and interact with each other on a very deep experiential level.

For this particular professor, nothing less than “the next level of the Internet” will suffice. He wants to create a sensing symbiosis between humans and machines and between the analog and digital. In doing so, he is striving to form a new sensory vocabulary; one that will revolutionise the way we experience the world.

“The most important thing is to keep pushing the barrier,” he says. “Do quantum step innovation, not incremental work. So that’s what we’re aiming for.”