Attendees of the Second International Congress on Love and Sex with Robots were treated to some innovative tech that promises to connect people in very intimate ways. This is not about teledildonics though, but about rather more safe-for-work interactions of an oral nature—namely kissing and licking.

Technology allows us to interact with our family, friends, and lovers over a distance like never before. We can see and hear them in real time, constantly exchanging messages and information. But the importance of physical interaction to the quality of these relationships is still grossly underestimated.

“Making regular physical contact is essential for maintaining closeness and intimacy in human relationships,” explained Emma Yann Zhang, a Postgraduate Researcher at City University London. She demonstrated her prototype Kissenger device to an enthralled audience at the conference. “Haptic communication is very effective in conveying one’s feelings and emotions as well as evoking a sense of presence in a remote environment.”

Described as a “Real-time Internet Kiss Communication Interface for mobile devices,” Kissenger transmits multi-sensory kissing sensations over the Internet. It works by using a plugin, haptic device that attaches to your mobile phone via its audio jack, producing bilateral force feedback in the form of both pressure and vibration.

“The dynamics of the movements and pressure felt by the human lips during kissing cannot be accurately reproduced by vibrations alone,” Zhang said. The haptic device needs to generate a series of localized forces in order to capture the haptic sensations during kissing.

To achieve this, her team designed an array of linear actuators positioned evenly across the lips to generate normal forces on the skin surface. The same number of force sensors resistors are placed on top of the actuators to measure the contact forces between the human user and the haptic interface. The design works like a phone case to make more space at the back of the phone for those sensors and actuators.

The power of a kiss

“Kissing is the most direct and effective way of sharing an intimate moment and Internet communications should allow people to connect to each other through this form of interaction. Studies have shown that a higher frequency of romantic kissing between couples increases romantic satisfaction and reduces stress levels,” Zhang said. She added that even people who would consider certain types of kissing inappropriate were OK with the electronically mediated sort and found the experience interesting.

I watched as Anna Malinowska from the University of Silesia in Poland shared a Kissenger moment with Clinical Sexologist Chloé De Bie. Malinowska said that she indeed felt a real sense of connection to her partner, even though they’d never actually touched.

It is interesting to see how such devices, even in a public environment, can engender a sense of intimacy and interconnectedness, and how this can be done in a non-sexual way as well. The aim, according to Zhang, is to provide an intimate communication channel not only for couples, but for families to physically interact over a distance.

Parents could use Kissenger to give their children a kiss on the cheek when they are away at work, for example. It could also be used for both one-to-one communication and one-to-many communication (another potential use-case cited by Zhang is of a pop star blowing fans a collective kiss, which each person could experience on their device).

The Kissenger team is now investigating the possibility of incorporating the scent communication device, Scentee. It would emit the perfume or a distinctive scent associated with the user’s partner to create a multi-sensory experience. Smell is an important factor that directly affects our emotional responses to a kiss. When two people are kissing, they are close enough to detect a class of genes present in body odor called MHCs, which determine our sexual preference and compatibility to a person.

Zhang said she believes that emitting a partner’s body odor during kissing helps to create not only a stronger sense of physical presence but also strengthens affection. The next step will involve incorporating other sensory modalities, taste and smell as well as temperature and moisture, to provide a full multi-sensory communication experience. 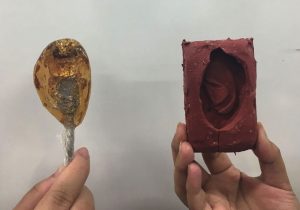 But for users who want to go a beyond kissing, Daisuke Yukita might have the answer. He’s been working with his colleagues Fathima Assilmia, Nadira Anndhini, and Dolhathai Kaewsermwong at Keio University in Japan to design lollipops that give a whole new meaning to “tickling your tastebuds.”

Teletongue is a device that enables remote oral interaction between two people. One Lollipop senses the licking gestures and sound of the user, while the other one vibrates according to the gestures and playback of the recorded sound.

Developers started off with incorporating a microphone into the lollipop to enable them to listen to the user’s licking movements. It seemed to make sense, therefore, to make said lollipop into the shape of an ear. “We modeled a human ear with 3D modeling software Maya, which we then 3D printed,” Yukita said.

The current version of the Teletongue system consists of a pair of those ear-shaped lollipops (which are not only edible but also tasty, according to Yukita) connected to an Arduino microcontroller. The microcontroller processes the sensed data from one lollipop (collected through a USB microphone that records the licking sounds and a Touché sensor to sense the gestures). 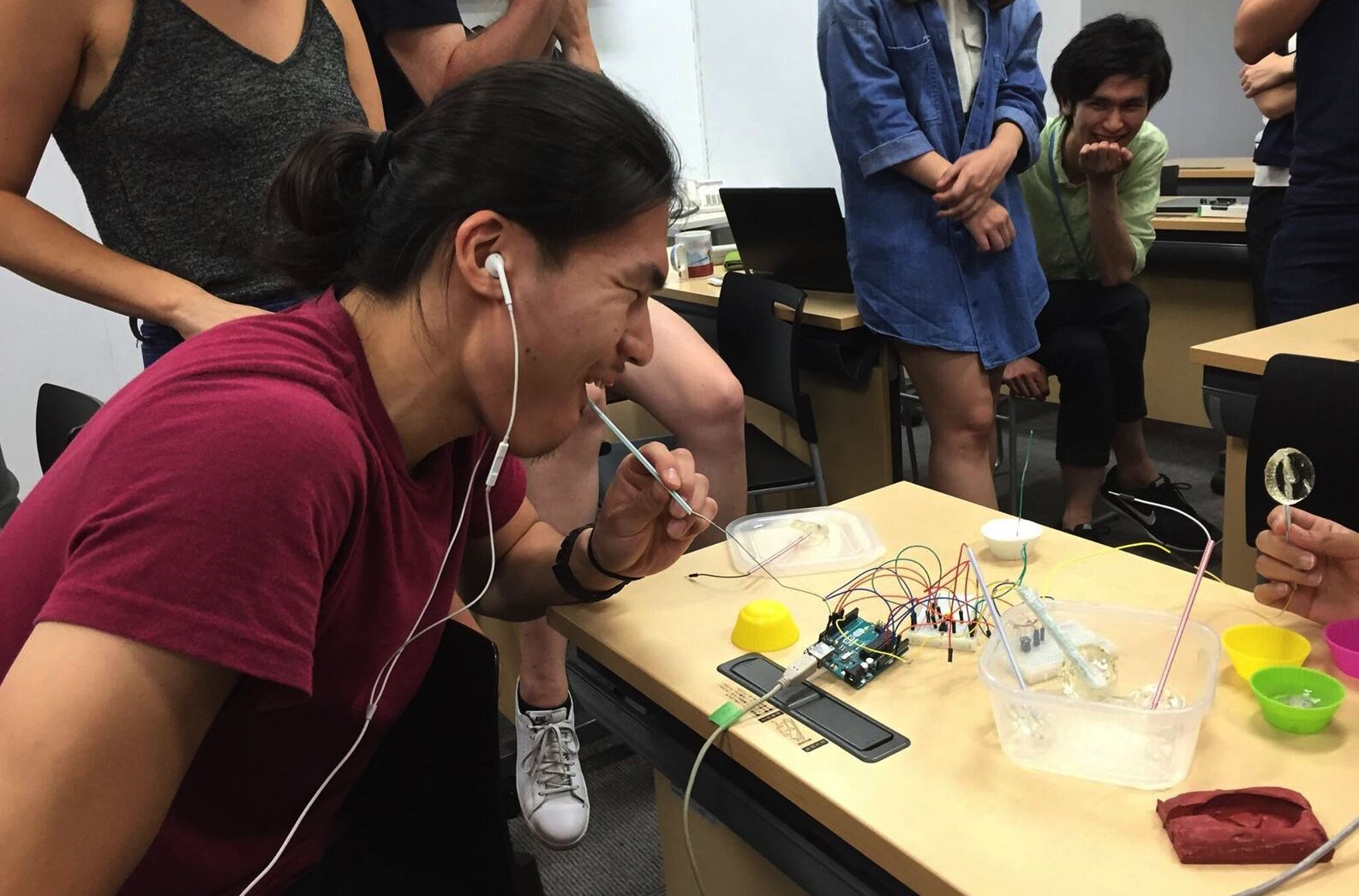 “There are many teledildonic devices designed to support intimate connections, but this is meant to provide a more natural way of enjoying intimate relationships that blends seamlessly into everyday life.” The aim, said Yukita, is to create a device couples feel comfortable using in public.

“We focused on the act of kissing and licking, which many have no problem doing outside of their home. For it to be a normal, everyday device, it also needed to be an object that everyone is familiar with and something that people have no problem putting into their mouth. We believe that using commonly known forms such as a lollipop will decrease people’s reluctance in putting an electronic device into their body, in this case, their mouth.” 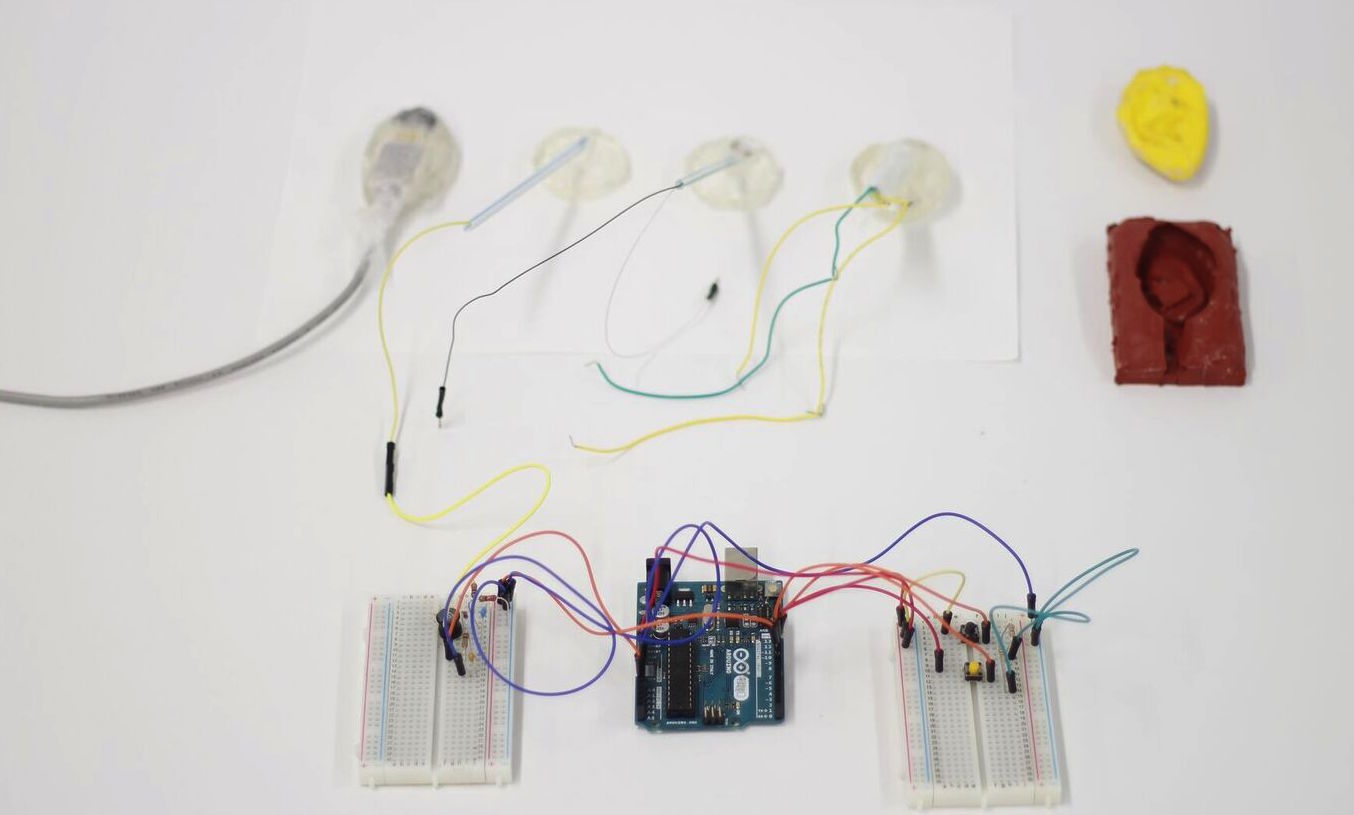 It’s still a work in progress, in that it doesn’t yet work in real time like Kissenger does. But the team is working to use the ZigBee protocol to incorporate that in future and connect the two lollipops remotely via the Internet so users can enjoy Teletongue simultaneously.

“We’re soon going to move on to testing on real life couples,” Yukita said. “We hope that Teletongue will be the first step to a more open and casual usage of sex toys and teledildonics, one that is not embarrassing, but comforting and bonding.”