You can now send tastes, smells and even kisses virtually. A new age of virtual reality involving all five senses is here, with Adrian Cheok of the Imagineering Institute at its forefront. 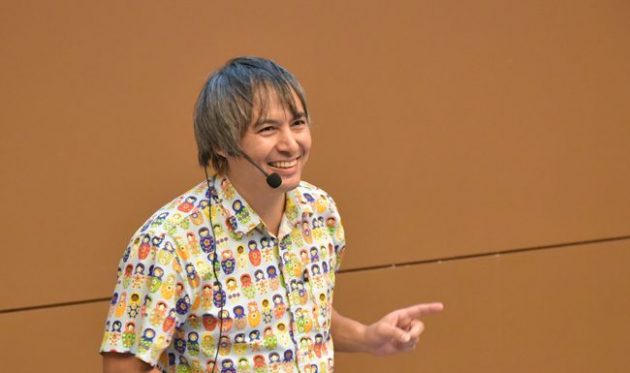 AsianScientist (Aug. 1, 2016) – Once the stuff of science fiction, virtual reality (VR) technologies are becoming ever more present in our daily lives. From documentaries that bring you to the Great Barrier Reef, to games that let you soar through the air as an eagle, this technology looks set to change the world as we know it. As director of the Imagineering Institute, Malaysia, and founder and director of the Mixed Reality Lab, Singapore, engineer and inventor Dr. Adrian Cheok believes that the future of mixed reality—the integration of the virtual and physical world—belongs to smell, taste and touch. Cheok has played a key role in the innovation of various mixed reality devices and applications, some of which have already been released commercially. His Huggy Pajamas comforts anxious children by allowing them to receive virtual hugs sent from their parents. More intriguingly, his Scentee smart phone attachment allows one to send and receive various scents on command. Asian Scientist Magazine recently chatted with Cheok, who was in Singapore to deliver the keynote speech for the Singapore Science Festival’s Visual SG event, to find out what has been keeping him busy.

In your own words, what is mixed reality?

Mixed reality is the merging of our physical reality with virtual reality, which can be done at the level of all five senses. Science has shown that we communicate with all of our five senses. In fact, non-verbal communication is more than half of human communication, and that’s why it’s still very different to have a meeting with someone with a video call than to meet them in person. Something is missing when you just communicate with video or through the internet. I believe that in the future, we will be able to communicate with every one of our senses through the internet, and move from the age of information that we are in today to the age of experience.

What are some applications of mixed reality?

Telepresence will of course be a big example of how mixed reality can be applied. If we can transmit all five senses, telepresence would allow people to really feel like they are together. They could touch each other, or even share a dinner together, even though they may be on totally different sides of the world. Mixed reality devices can also create new kinds of communication. If you can digitally taste and smell, then you can have an app on your smartphone and virtually taste and smell a dish at a famous restaurant. Another big benefit is also of collaboration. For example, you could collaborate with one or many people, like cooking a dish together through the internet. Another application that mixed reality will lead to is new kinds of learning. For example, instead of reading a book or watching a movie about ancient Rome, you could feel what it’s like to be there and even taste and smell what it’s like to live in an ancient city. This would create a totally new kind of learning because we humans learn very much experientially.

What first drew you to work on virtual reality?

I first began by looking at augmented reality systems, which allow people to see virtual 3D objects in the physical world. I noticed that the first thing people did was to try to touch the objects. That’s when I realized that we have to extend augmented reality beyond the 3D graphics that we see on our video games and movies. We need to use touch, taste and smell to really create a sense of presence in the virtual world. That’s what I call experience communication: not just sharing information, but sharing your experience.

What are some of the limitations to engaging our five senses using virtual reality?

Right now, we are concentrating on making the technology that allows for the virtual communication of touch, taste and smell by digitizing these senses. It’s a very difficult problem. Fundamentally, sound and light are frequencies: they are wave-based, and can be transmitted into digital bits onto the internet. The fundamental problem with touch, taste and smell is that it’s a different kind of sense. For smell, we sense molecules, which triggers some electrical pulse to your brain. It’s still very much in the early stages of research but we have successfully been able to produce virtual taste, using electrical signals only and without any chemicals. We are now working on smell, which is an even more difficult problem. Unlike taste, where we only have five different taste receptors, most scientists estimate us having a few thousand different kinds of individual smell receptors. How do we stimulate those individual receptors? It’s going to be a very big problem, but so far we have gotten some success by using small electrodes on the inside of the nose to stimulate olfactory sense.

How do you think virtual reality technology will evolve in the next 20 years?

Technology is increasing at such an exponential rate that we can’t imagine exactly what the world will be like, but we can imagine that it’ll be incredibly different. I think that whatever that doesn’t break the laws of physics can be invented by humans. We can’t change the fact that we’re born with five different types of taste receptors, or that there’s a specific range of frequencies we can see and hear, but I believe that we can somehow alter our perceptions with technology. For example, the spectrum of light is much wider than what we can see. We can’t see infrared with our naked eyes but we can now visualize it with infrared glasses. In some way, we already live in our own virtual reality: an analog biological virtual reality, because we are just seeing the world we are naturally designed to see. We think that this is the reality but it’s not—that’s why it’ll be so much different when we have virtual reality, because we already don’t see a kind of ‘objective reality.’