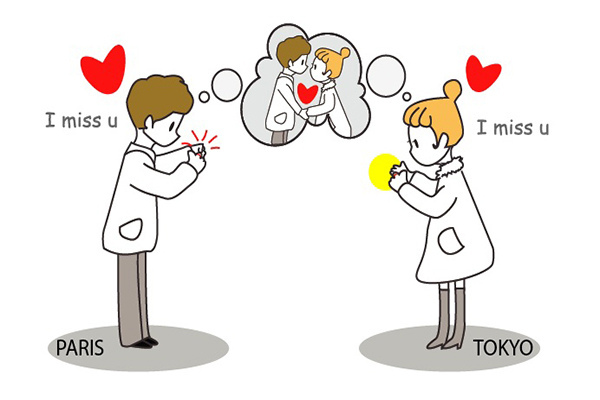 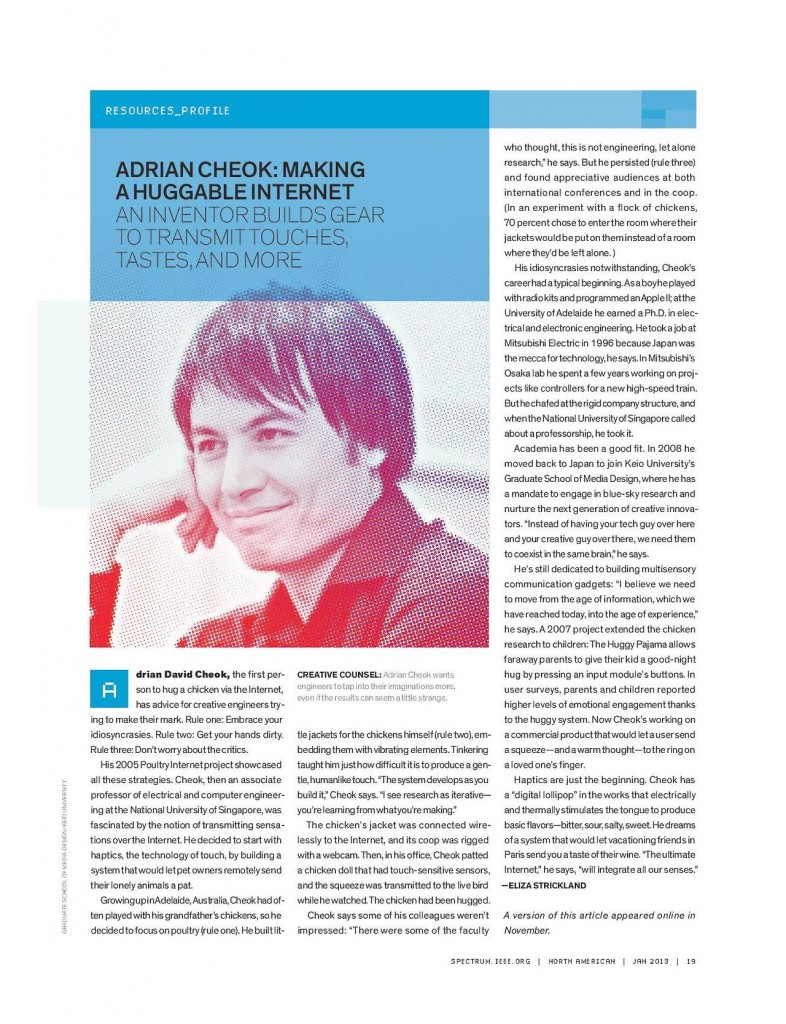 An inventor builds gear to transmit touches, tastes, and more

1) What kinds of technologies realise the ‘reality-virtuality coexistence’ in our daily life?

– Adrian:A process of hyperconnectivity, afforded by such technologies as cloud computing and social media is merging the physical reality and digitaldata.

– Howard: Fundamentally we are talking about video, mobility and cloud. This presumes affordable broadband services with infinite bandwidth.

– Genevieve: It’s more about the experiences supported/enabled by various technologies (e.g. mobile phones, social networks) than technologies themselves. In fact, experiencing virtual worlds is not strictly about technologies- take religious rituals for example.

2) Where is this zeitgeist heading and how will they shape our future?

– Adrian: in a direction that encompasses more of our senses and feelings. Our social networks may extend beyond humans to an emotional/non-verbal communication between humans, their environments, devices and objects.

– Howard: mixed reality technologies will be applied more extensively to the such areas – but not limited to – as virtual training, immersive teaching/learning. These virtual reality-supported learning experiences will increase competence, success and well being in many of our activities.

– Genevieve: The ways for ‘social networking’ will become more diversified,and new modes of digitally enhanced social engagements will continue to emerge. Cultural, social and regulatory frameworks will play an important role in this process.

3) How we can make AR/MR become more humanised and sustainable?

– Adrian: The use of visual, auditory, haptic, olfactory and gustatory senses will enable a new paradigm of more humanised telecommunication. This field has a long way to go, but it would be especially interesting to see how children will grasp these technologies to create value.

– Howard:Are AR/MR technologies about creating alternative realities or enhancing the ‘real world’? – it should be about extending and enhancing our physical world. When used for learning and training, AR/MR can prove to be powerful tools for creativity, innovation, collaboration and productivity.

– Genevieve: We are moving from command-control interactions with technology to possibilities of forming ‘relationships’ with them. Siri for example promises to ‘listen’ and gives us a sense of being taken care of. We might imagine a relationship in which humans and technologies are effectively bound to each other.

That’s Not A Droid, That’s My Girlfriend | The Global Mail

Adrian David Cheok interviewed in article about robotics, together with Hiroshi Ishiguro and David Levy.

Adrian David Cheok, an Australian who is now a professor at Keio University in Tokyo, is one of the journal’s founders. The way he sees it, the internet has already helped bring people closer together. But it’s an experience limited by the fact that the internet currently only interacts with two of our senses: sight and sound. Anyone who has been brought back to childhood by a smell, or been comforted by a hug or touch — in other words, pretty much everyone — knows how powerful such senses can be.

“Actually, physically it’s also been shown that the smell and taste senses are directly connected to the limbic system of our brain. The limbic system of our brain is responsible for emotion and memory. Unlike the visual sense, which basically gets processed by visual cortex and then the frontal lobe, which is higher-order, logical part, we have direct connection between smell and taste and the emotional and memory part of our brain,” Cheok says.

“So much of our lives now is online, but still I think a lot of us will agree it’s so different than meeting someone face-to-face. You have all these different physical communications that we can’t capture now through an audio/visual screen,” he says. “Essentially I’m really interested in [whether we can] merge all of our five senses of human communication with the internet — with the virtual world. That’s what I call ‘mixed reality’.”

Robotics plays a key role in making that a reality, through what is known as telepresence. Basically, it means transmitting actions into a robotic surrogate somewhere else. This can be fairly simple, Cheok says. Cheok and his students have already developed a ring worn on the finger that can deliver a gentle squeeze from a loved one, via a smart phone app. A student of Cheok’s has recently commercially released a vest that can transmit hugs, which is proving useful for calming autistic children. Cheok’s engineers are working on systems to transmit taste, via electrical impulses to the tongue, as well as smell, either via electrical stimulation or the release of chemicals.

The goal further down the track will be the creation of robotic avatars — representations or embodiments of people, though not necessarily made to look like them. To start with, these will be soft, fluffy and not particularly complex. For example, we could transmit our presence into a pillow or teddy bear. But as the endeavours of such scientists as Hiroshi Ishiguro progress, the creation of human-like surrogates will become possible.

“We’re definitely getting there… The rate of change of technology is exponential. What before maybe we thought would take 50 years now takes 5 or 10. I don’t think it’s going to be very far off when we have humanoid robots. They may be expensive at first,” Cheok says.

“I think at that stage, we can have virtual avatars; virtual robots which then, for example, [let you] be in Tokyo or Sydney and give a conference in Los Angeles. You don’t have to fly there. Your robot can be there.”

If there’s one major obstacle in the way of Japan’s projected robo-utopia, it’s the country’s economic situation. Japan has been in a state of economic malaise for more than two decades, and memories of the robot-supported boom years are fading. Neither the companies likely to do the research nor the Japanese government are as flush with cash as they used to be.

One of Japan’s major strengths — its peacenik constitution — has also proved to be a weakness. In the United States, the massive military-industrial complex has marshalled resources to create some truly impressive machinery; drones, for example, have been developed to meet guaranteed demand from government agencies. In Japan, however, there is little co-ordination between different institutions and industries, explains Nishida of Kyoto University.

“People are just interested in working on small parts of the problem, rather than looking at the whole,” Nishida says. While some work on artificial intelligence, others are focussed on the outer physical appearance of robots. With co-ordination and plenty of funding, a fairly complete intelligent android could be built within the next decade or two, he says. Under current conditions, it will probably take longer.

But the consensus is that such robots are coming, and that they will most likely be made first in Japan.

Cheok, of Keio University, says he’s not convinced we’ll produce thinking, feeling, conscious robots until at least the middle of the century, if at all. But he is certain we’re heading towards a loving technological future.

Thanks to their Shinto beliefs, the Japanese have fewer cultural barriers standing in the way of forming close emotional bonds with machines. But as robots become smarter and better looking, he says many more people of other cultures will become ensnared.

“I think the thing is that we already develop bonding with not very intelligent beings. As a kid you might have kept a pet hamster or pet mouse. They’re not actually so intelligent. But I think that a kid can even cry when the hamster dies,” he says.

Extract: With the continuous advancements in computing and media, technology has widened to include multi-sensory experiences in remote interactions. Using electrical, thermal, and magnetic stimulation technologies we are currently experimenting on reproducing smell and taste sensations digitally. As a fundamental aim of this research, we will develop novel user interfaces that empower people’s life with digitized taste and smell communication capabilities. This research will generate important avenues for further research areas using smell and taste based interactions and new media. As the ultimate goal of this project we will develop devices which could actuate taste and smell sensations digitally through the Internet.

We will need to develop new protocols to codify these sensations as well as how to transmit them over the internet. New interfaces for how to send and receive these kinds of sensations will have to be designed. We hope that this will open the doors to new paradigms in human-computer interface design and new fields of research in academia.

Slashdot How To Hug a Chicken Via the Internet

the_newsbeagle writes“Adrian Cheok, a professor of electrical engineering in Japan, wants to invent a “multisensory Internet” that will transmit not just information, but also experiences. To usher in this new age, he started by building a haptic system thatenabled him to send a hug to a chicken via the Internet. Next came the ‘huggy pajama’ project, which allowed distant parents to send their kid a goodnight squeeze. Lately he’s begun working on sending a taste over the internet with his ‘digital lollypop’ project.”

“I believe we need to move from the age of information, which we have reached today, into the age of experience,” he says. A 2007 project extended the chicken research to children: The Huggy Pajama allows faraway parents to give their kid a remote good-night hug by pressing an input module’s buttons. In user surveys, parents and children reported higher levels of emotional engagement thanks to the huggy system. Now Cheok’s working on a commercial product that would let a user send a squeeze—and a warm thought—to the ring on a loved one’s finger. He hopes to have a prototype ready by the start of 2013.

Haptics are just the beginning. Cheok has a “digital lollipop” in the works that electrically and thermally stimulates the tongue to produce basic flavors—bitter, sour, salty, sweet. He dreams of a system that would let friends in Paris send you a taste of their wine over the Internet. “The ultimate Internet,” he says, “will integrate all our senses.”